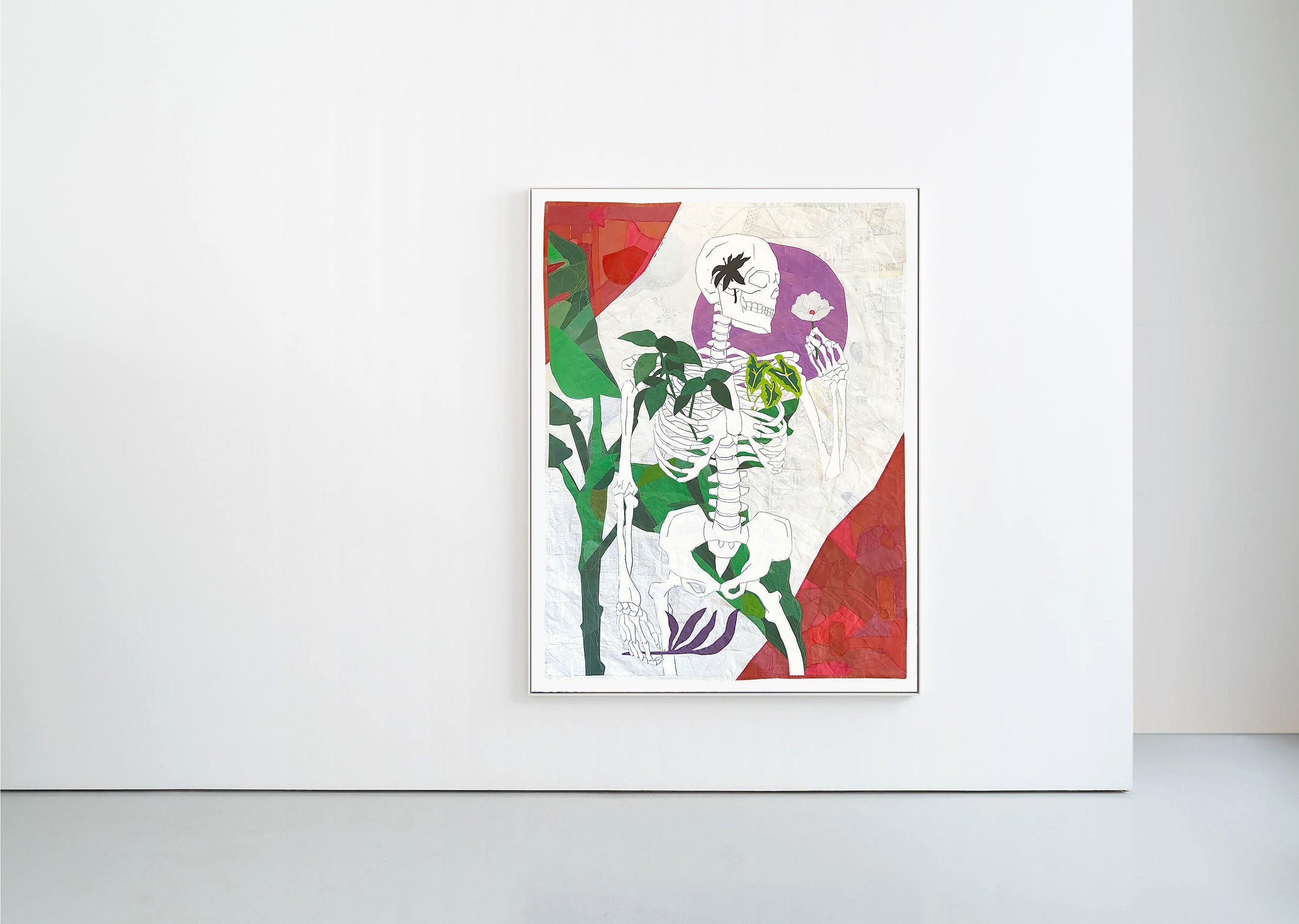 Genre pictures is Michael MacGarry's 15th solo exhibition and his 6th with the Everard Read group. The show continues the artist's focus on socio-political and economic narratives, particularly within the context of Africa, and presents a comprehensive body of new work from his ongoing ‘Tontine’ series of large-scale textiles sewn from salvaged cement packet paper as well a new body of sculpture rendered principally in steel, aluminium and found objects.

I am not interested in illustrating my time... Our age is one of science, of mechanism, of power and death. I see no point in adding to its mammoth arrogance the compliment of a graphic homage.

Sure, but also no. Not for me at least. The phenomena of the world – or rather a world, or even just parts of a world that pull me in – all drive this new body of work, Genre pictures. Another is conjecture as to circumstances in which refined conceptions of advanced capital are finally turned against themselves with a fervent zeal normally reserved for the fanatical. Instead, we collectively watch the systemic destruction of the regenerative capacity of this planet as it operates far beyond any understanding of its design limits – seemingly as a by-product of a globalised addiction to same-day delivery and on-demand customer service for goods from distant factories we pretend don't exist. All while lying prostrate at the foot of the altar of shareholder value in a pose defined in the study of the animal kingdom as 'presenting'.

But that's just today. Of tomorrow I wonder about a place my children could well live in – the 22nd century. What their lives might look and feel like. As dust-scratched utopias from the 1920s onwards morph, collapse and the film stock burns out – flying cars and shimmering cities are replaced by the detritus of a projected 10.9 billion human beings all eating, burning, killing, consuming and discarding. Everyday. To say that the future existence of the panda bear or the rhino is doomed would be to state a simple fact, or to dwell on the brutality of there being less than 120 000 Orangutans1 (all three species) currently alive in the wild is to acknowledge the painful probability that there will be none by the time my 4-year old son is my age. In the interim, the world's twelve largest fossil fuel companies are set to spend $103 million per day for the rest of this decade2 on finding, developing and exploiting new fields and mines of oil, gas and coal.

Every age in recorded human history experiences a kaleidoscope of morbid fears of the future, of what lies ahead in wait. This generation and the ones to follow – though probably not too many – have finally, through the compound expansion of human interests and presence on this planet – and at the expense of quite literally anything and everything else – created a showdown with the ultimate boss on the final level in the last video game of all time: the collapse of our ecosystem.

In the one corner, weighing-in at 1.1 trillion metric tons, is all biological life on this planet. In the other corner is a human being who wants their new phone delivered today. Or else. 2022 could well see the first time in history that human-made materials equal this weight of all life on Earth3 – the artificial stuff outweighing the living things. As a snake eats its own tail, the latter is feverishly consumed to expand the former. For now, we know of no cheat codes to this game – several missteps or a function of our lazy, collective arrogance will see the dreaded block-capital terminal finality of GAME OVER fade-in. Only to fill the screen forever. It is the seeming inevitability of this process,

the sublime metaphysics of an event too large, slow and unknown to conceive of and quantify wherein lies the horror. And yet it turns – unequally to be certain but with a torque and inertia no amount of technology can stop. Climate change as an oppositional, second-hand human force – perhaps for the first time in answer to our delusional concept of nature itself and terror in the face of its total indifference to human will or endeavour.

In the face of this, Genre pictures represents my attempts to define both change and continuity within the confused totality of my own historical time and narrow experience – set against billions of instantly forgotten asymmetrical exchanges within the highly organised, fluid movement of products and labour. The jumbled accumulation of commodities, services and the lumpy, animal human bodies that make and do them, apparently condemned to a permanent now without historical memory or any concept of a future, optimistic or otherwise. All underwritten by a growing feeling that politics, political action, standards of participation and the basic machinations of governance and representation are essentially meaningless when led by politicians whose very grasp on how things actually work and the vested interests that wield real power evaporated sometime in the 1990s.

Genre pictures evinces numerous idiosyncratic strategies as ways out of the present, past cul-de-sacs of how-to-guides to alternate futures past narrow histories more defined by exclusion than anything factual, and returns to acknowledge the futility, but existential necessity, in attempting to write the present into the past. To cut it from the real, or rather – framed within the context of our isolated, technologically mediated bubbles – the reel:
‘The storm irresistibly propels him into the future to which his back is turned, while the pile of debris before him grows skyward.’ (Walter Benjamin) 4

And yet these genteel criticisms, congenial abstractions and two vanilla quotes from long dead white men are but water into sand when compared to the personal, lived experience of being in physical proximity to an artwork in its own time and space: Genre pictures runs 03 – 23 August 2022.

Michael MacGarry (b. 1978 Durban) is a multi-award winning visual artist and filmmaker based in Johannesburg. He holds a Master’s Degree in Fine Art from the University of the Witwatersrand. MacGarry is a fellow of the Gordon Institute of Performing and Creative Arts (GIPCA) at the University of Cape Town and a recipient of the Standard Bank Young Artist Award (2010).

Michael’s political and poetic oeuvre is realised across a diverse range of media – including sculpture, photography, installation and film. His practice focuses on socio-political and economic narratives, particularly within the context of Africa, drawn through a post-humanist autobiographical mode.