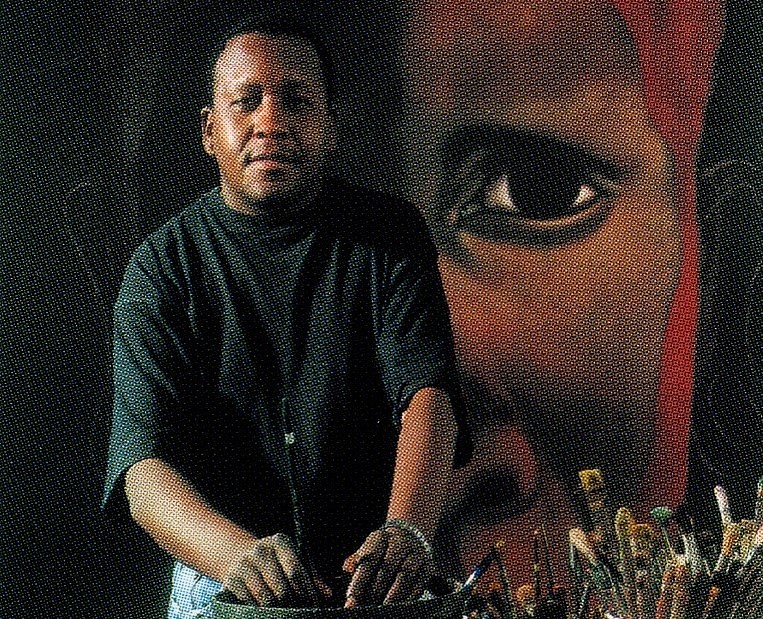 It is with great saddness that the Everard Read galleries announce the loss of artist Velaphi Mzimba, who passed away 24 June due to Covid-19.

By the time of his first solo exhibition in 1981 at the Carlton Hotel in Johannesburg, a gallery run by the South African Association of Arts, 22-year-old Velaphi Mzimba had found a voice to contribute to the fight for a humane and equitable South Africa.

At the height of the struggle against apartheid, when African people were essentially stripped of their humanity and their identity, Mzimba used his brush and canvas to restore their dignity and stature. There was a familiarity with his subjects, who were inspired by his curiosity about the different ethnic groups across the African continent.

At the peak of his career in the 1980s and ‘90s, Africans were not allowed a seat at the table outside of their township homes, but were ‘good enough’ to be the ‘help’, like his mother Violet (who was a domestic worker in the suburbs) and his father Peter (who was a driver). Mzimba put Africans in these ‘hallowed’ spaces – the homes, boardrooms and hotels of the oppressor, who was enamoured with them. While most of these collectors superficially saw the artistry in the work, the large eyes of an Mzimba portrait gazed in such a particular way that afterwards one felt as if one were being followed. They seemed to emphasise that whatever was being done behind these walls was under a hawkish watch.

To the marginalised majority, there was a familiarity to the work, as if one had encountered the person before. They saw themselves in Mzimba’s paintings. Mzimba dared to challenge the oppressor and showed that Africans were human too. He restored their humanity, and gave them a face. He celebrated their identity, their deep melanin and way of life – dark, textured and colourful.

In between, he would depict how they escaped the misery of oppression through music or went about their work in the midst of oppression, as in his celebrated work depicting the Zama Zama miners (illegal gold miners) and township life. Subjects as seemingly mundane at face value as fruit or vegetables – an apple, orange, cabbage or beetroot – were all brought together in his recognisable compositions. He would find objects that represent African lives – the discarded metal basin, shovel, doors, corrugated roofs, used clothing, anything – and bring them alive by juxtaposing or superimposing them in his paintings. Using his brush to make them larger than life, these were a tangible and constant reminder of the African struggle.

A humble, quiet and relatable artist, this was how Mzimba took on the struggle for liberation against apartheid: through his work, which infused optimism, humanity and dignity. This is his legacy.

Born in Dube, Soweto, on the 19th September 1959, Mzimba was the only boy and the 4th-born child of the late Violet (née Mabuza) and Peter Mzimba. He discovered his love of drawing at an early age and was encouraged by his father. He dropped out of school due to the 1976 uprising when the school was closed. At the age of sixteen, he joined Mofolo Arts Centre in Soweto, where he learned drawing, oil painting and pastels with Dan Rakgoathe. Years later he won a bursary to study at the Johannesburg Art Foundation under the late Bill Ainslie. An award-winning and revered artist across various media, he worked as a professional artist based in Johannesburg until his sudden death. At the time of his passing, he was working on a seminal collection celebrating great African women with his longstanding gallery Everard Read. Mzimba's work graces many public, corporate and private collections worldwide.

Mzimba passed on unexpectedly on 24th June 2021 due to Covid, in the arms of his wife Boitumelo while waiting to be attended at hospital.

His eldest son, Bonginkosi “Bobo”, who was born on 30th January 1989 to Velaphi and the late Zandi Mahlangu, and who excelled in boarding school at St Albans until his struggles with mental illness, unexpectedly followed Mzimba and passed on peacefully in his sleep at home on 27th June due to Covid.

Mzimba and Bonginkosi are survived by his wife, Boitumelo, children – Tebogo “Tebs,” Lesedi, Khanyi, Siphesihle “Malobisa,” Seti and Fili – his siblings, Betty, Julia and Sbongile, and the Mzimba Family.