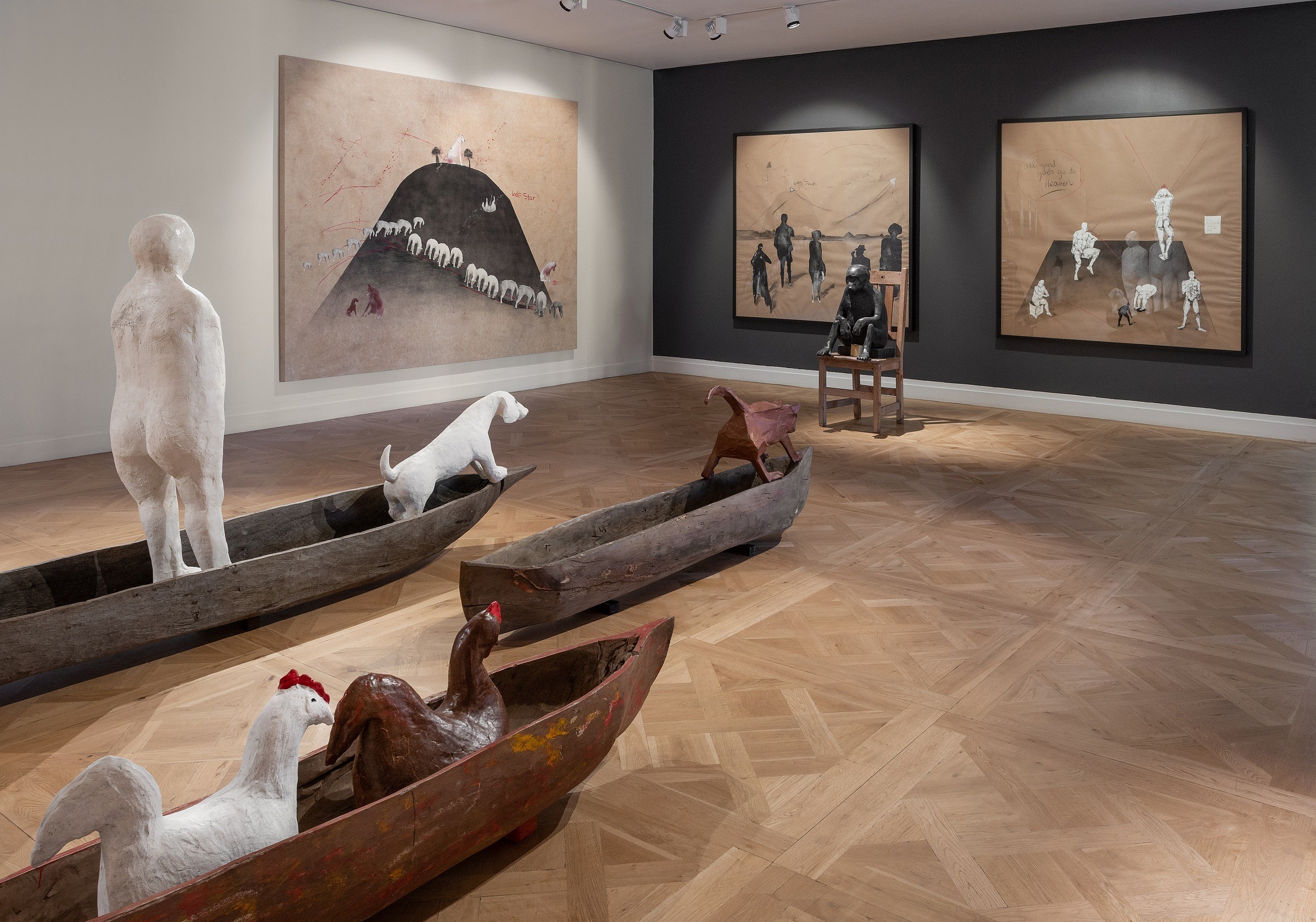 1984 Fight or Flight: Apocalypse Now? is Wilma Cruise’s most poignant and pertinent exhibition to date, concretising all of her concerns as an artist, a sculptor and a human. Here she presents a devastating and yet delightful body of work invoking both portent and pantomime. Despite the Orwellian dystopian inspiration, or perhaps because of it, Cruise nudges us to examine our humanity and relationship with the world through a gentle use of comedic pathos. In both of the central installations, amorphous humans and animals float together as flotsam in dugouts (as compared to a flotilla) or drift on forlorn horses, a caravan (rather than a cavalcade) – neither so much a procession as a bedraggled, aimless collective adrift. These, then, are monuments to the moment in the face of mounting crises like pandemics, inequality, refugees and climate change, calling perhaps for the end of human pomposity, hubris and triumphalism and inducing reflection on a future that might yet be brave enough to contemplate inclusivity, humility and temperance. In fact, when confronted with these works, perhaps Cruise is saying that this is not the new normal, but should always have been so.

1984: Fight or Flight? Apocalypse Now, focuses on the relationship between human and other animals. Like the seven consecutive solo shows that constitute the suite of works, The Alice Diaries, (2011 – 2018), the sequence will be realised in a succession of exhibitions. As in previous shows, this exhibition was motivated by an anxious awareness of environmental meltdown and crucially the current pandemic. Faced with unbearable environmental conditions, choices for humans, and, critically, other animals, are reduced to a binary conundrum: fight or flight. Following the inchoate need to flee, boat loads of people from the south, take to the perilous waters to cross to the (perceived) safety of the Northern Hemisphere. The human flight is echoed by the mass migration of other animals, fleeing drought, wild fires, degradation of their environments and the persecution by the apex predator: Homo Sapiens. George Orwell’s two dystopian novels, 1984 and Animal Farm act as a parallel texts to the visual objects. At this cusp in our history, Orwell’s novels are particularly apt in visualising a kind of post-apocalyptic world. Nevertheless, it is important to note that the artworks do not illustrate nor explain Orwell’s writings. Rather they act as an alternative text – a response as it were to his prescient vision.