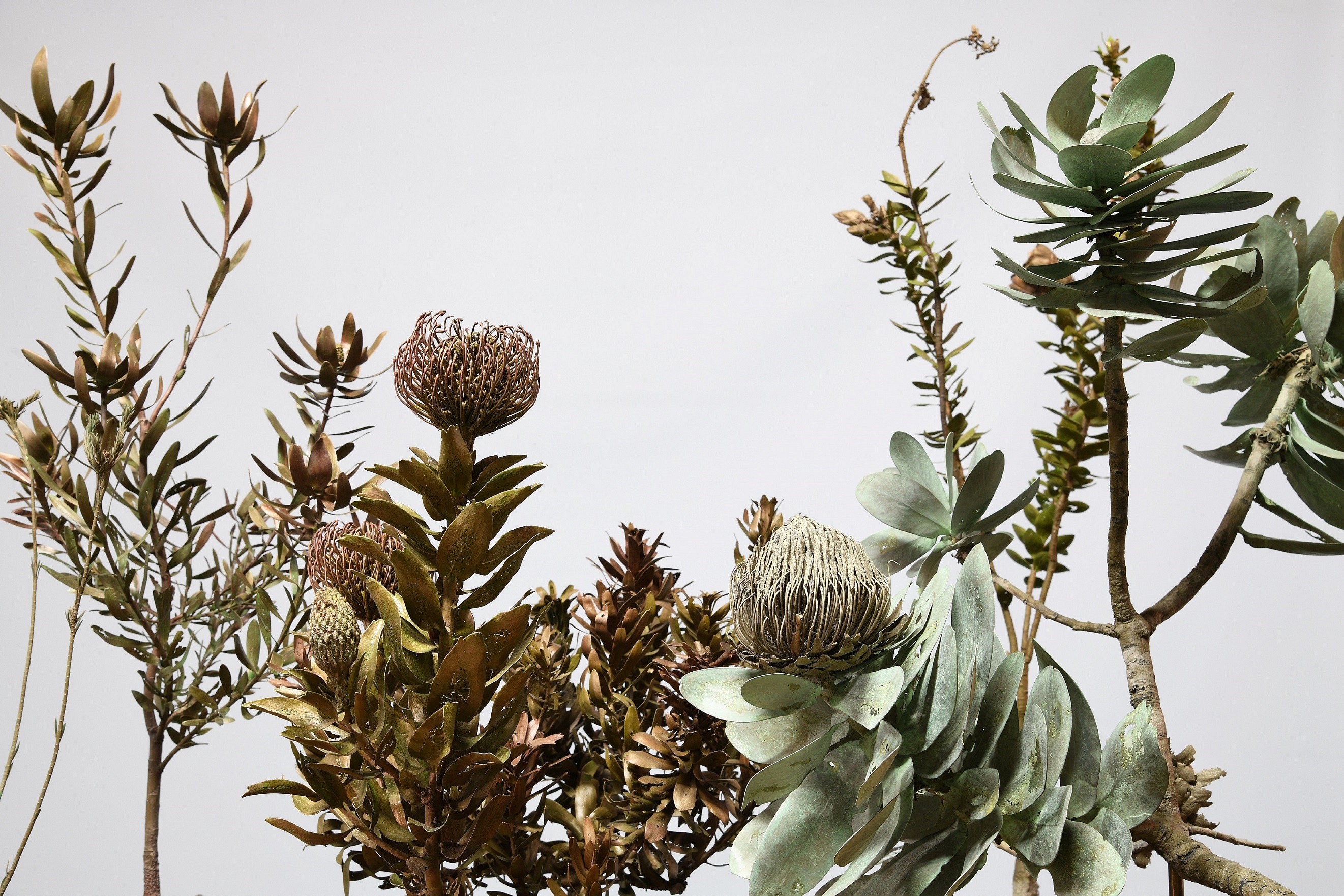 Everard Read CIRCA Cape Town is pleased to present Proteaceae – a solo exhibition of new works by Nic Bladen. Opening on Thursday 30th January at 18:30, the exhibition runs until 22nd February 2020.

When raging fires turn mature fynbos to ash, there is the tendency for some to view this as a dreadfully destructive event. But it is in fact the opposite. It is a process of revival and renewal. Without fire, fynbos would become moribund and die out. Instead of fire being a harmful force, it stimulates germination of the seeds, and awakens bulbs that have patiently waited for their turn in the sun. Thus, fynbos fires give many plant species the opportunity to reproduce and flourish in their breath-taking splendour.

Over time, they again retreat for years – even a decade, or more – as they are overtaken by those species that produce the dominant percussion in the symphony of mature fynbos. This must be one of the most compelling allegories of nature where fire – as the violently powerful sculptor – can craft something so precious, so beautiful and totally unique.

When Nic Bladen showed me around his foundry, it struck me how his creative process matched that of fire in fynbos. Out of the incineration process in a furnace he was able to produce delicate artistic reconstructions of astoundingly beautiful flowering plants.

Having lived for the past decades right in the epicentre of the Cape Floristic Kingdom, it was only natural for Nic Bladen, the artist, to turn to this botanical treasure chest. And understanding the significant pressures that many of these gems are facing, it became his mission to preserve their singular beauty through his art. His passion for plants is clearly evident in his sculptural works. The precision and care that go into casting and reconstructing lifelike replicas are immense, and Nic has become a master of his craft.

Nic has recently turned his attentions to the spectacularly beautiful Protea family and the exhibition represents about 10% of the species occurring in South Africa.

Proteas are flagbearers for many other species which are under threat. Not only do humans have significant negative impacts on range-restricted species – among which almost all species within the Proteaceae family count – but the indirect impacts of a changing climate will only be fully realised over the coming decades.

To this end, organisations such as WWF have worked tirelessly to ensure that the unique magnificence of the fynbos in general, and Proteaceae in particular, is sustained in altitudinally varied conservation areas. WWF has over the past decades acquired over 160 000 ha of high priority conservation land in the Western Cape alone, comprising around 10% of the protected area estate that is managed by its important partner, CapeNature. In addition, WWF founded the Table Mountain Fund, which is passionately dedicated to preserving fynbos.

It is customary to expound the virtues of fynbos (the primary vegetation of the Cape Floristic Kingdom) as a point of departure, but instead it is what I wish to leave the audience with. This is one of only six floral kingdoms globally. Compared to the considerable extent of the Boreal Kingdom, the Cape Floristic Kingdom is the equivalent of a protea seed to a mature forest. Yet it supports almost 10,000 plants species, of which over two thirds are unique to this small region. It is so incomparably unique that not even tropical forests can match it. This fills one in equal measure with unbridled pride and a duty of responsibility.

Email us here for a portfolio

Read the full write up and artist statement here