MICHAEL MACGARRY: A coarse sorting of the readily available 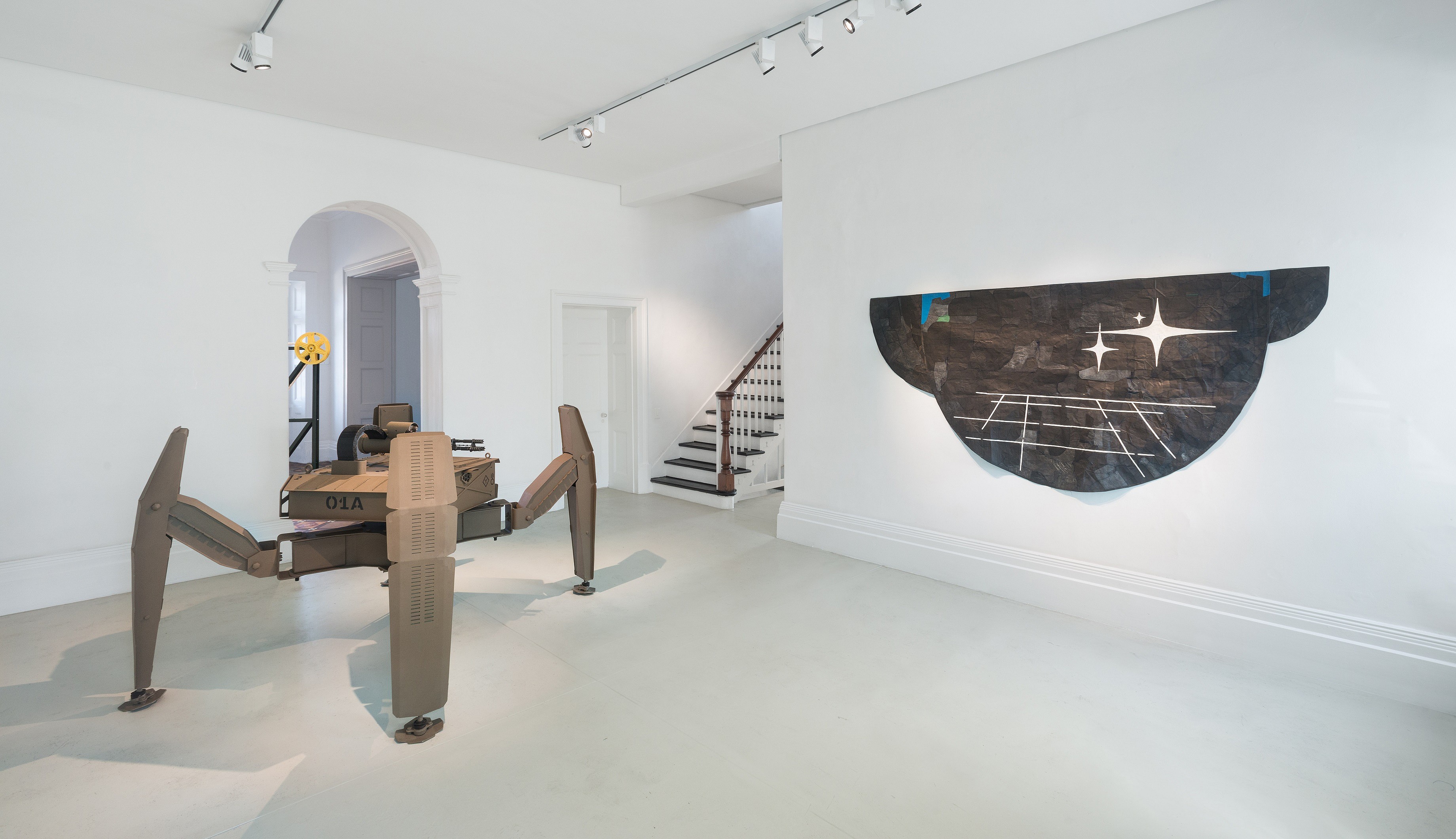 Everard Read / CIRCA Cape Town are proud to present A coarse sorting of the readily available by Michael MacGarry. This is MacGarry's first major solo exhibition at the CIRCA Cape Town gallery. Opening on 14th November at 18:30 the exhibition runs until the 2nd December 2018.

Everard Read / CIRCA Cape Town presents a comprehensive body of new work by Michael MacGarry across sculpture, installation, video and two-­dimensional work. The title of the exhibition both references the artist’s practice of repurposing found materials from the areas surrounding his studio in Johannesburg as well as the partially retrospective aspect of the works exhibited, dating from 2011 through to 2018.

MacGarry states:
“I am increasingly drawn to the narrative capacity of objects – especially those repurposed from my immediate surroundings, that morph from utility to aesthetic, through processes of grafting imaginary and visible realities – as embodying compound ideas and multiple antecedents (both formally and conceptually) yet are not manifest. That are in fact resistant to overt communication. A process that dissects the works from both myself and the sum of their parts, forcing them – sometimes quite violently – to exist on their own terms, robbed of their former utility, and given new responsibilities.”

The focus on making tools, weapons and working with found elements of structural engineering, the construction industry and more broadly, simply steel fabrication – redolent across the exhibition – represent, in part, both a sense of the relative autonomy in being an artist – making things, building objects – and in counterpoint, a tension in the very fact of being an artist versus actually making buildings, engineering or involved in tool or weapon fabrication. The varying formal qualities of the fabrication of the sculptures themselves function as mark-­making as well as conceptual resistances to and sometimes mimicry of, the production values of functional objects;; the welding is consciously rough and crude in certain works and elegant and invisible in others.

The exhibition features a broad series of new works from the artist’s ongoing Tontine series of large-­scale sewn textiles utilising found cement packet paper, as registers of industrial progress and infrastructural development in key Sub-­Saharan African countries. A process where the artist cuts out the screen-­printed colour paper from found cement packets, washes and irons these paper fragments and sews them into wall-­mounted textiles redolent of hand-­made sails. Four new works are exhibited for the first time, marking a formal departure with the inclusion of 1980s logos and symbols that recall both the iconography of the entertainment technology of the artist’s youth as well as themes of extraterrestrial influence detailed in the experiences of the Dogon peoples of Mali. The racist notion of external influence in the development of arts, crafts and sciences of African peoples particularly in the previous century is a subject MacGarry first broached in his 2010 film Will to Power, focused on a satirical rendering of this patronising Western viewpoint within the context of the Great Zimbabwe Ruins. Works such as Canicula (2018) and Sirius and the Spider (2018) look particularly to the legacy of Western anthropological interference and myth-­making in the 19th century reading of the Dogon people’s knowledge of the Sirius star system. Either a miscommunication or a directly fabricated misinterpretation during primary research by two French anthropologists Marcel Griaule and Germaine Dieterlen in the 1950s, in part gave rise to the toxic ‘ancient astronauts’ genre of essentialised conspiracy theory, subsequently disproved entirely by anthropologist Walter Van Beekin the 1990s.

Cinematic representations of Africa – both real and imagined – are explored in multiple works on exhibition, from Blomkamp’s District 9 (2009) in Private Grammar II (2011), through to the Warner Bros. branded 35mm film reels of Porte-­parole (2018) and within the collected flags of Posuban (2016). Dated modes of colonial-­era exploration unfold in PLAY, DIE, RESTART – a purpose-­made feature-­length video that forms the sixth filmic work by the artist in an ongoing series that individually, and collectively, corrupt cinematic legacies of Conrad’s novella Heart of Darkness (1902). PLAY, DIE, RESTART is a refilming of the 2017 feature film Kong: Skull Island with the visual component of the film corrupted through a fractal lens while the original audio screens intact. A stated key influence of the film is Francis Ford Coppola’s Apocalypse Now and its second-­hand narrative conceit of a journey up-­river into the Heart of Darkness. That a film made in 2017 can be based closely on stereotypical narratives dating to over a hundred years ago is lazy in the extreme, that said film can generate over US$500m in ticket sales is deeply problematic. Two recent video works – Parang (2017) and Der Magnetiseur (2018) – make use of documented self-­presentation, or self-­staging (not performance), to elaborate on the personal historical (what can never be again). The two-­channel video, Parang, operates within the realm of Harrald Szeemann’s notion of individual mythologies – following a circuitous, omni-­ linear route via one channel of the lifecycle of the silk worm from birth, through growth, into pupae, chrysalis and metamorphosing into a moth that mates and dies once all its eggs are laid. This narrative, is paired with a second video channel detailing the graphic disruption of key architectural references from the artist’s own life and family history through stop-­motion animation. Running through these spaces of habitation and remembering are two objects the artist’s family brought with them from Malaya (now Malaysia) to South Africa in 1958;; a 12-­gauge shotgun and a small ivory carving. The two-­channel video loops endlessly and is in part an exercise in the entropy and absurdity in constructions of self and place. In the ground floor, housed within a rudimentary child-­like rendering of a vehicle, screens the feature-­length video – Der Magnetiseur (2018). The video concerns a carnivalesque self-­portrait of the artist, as a live-­filmed performance of MacGarry playing a 60-­minute composition on a digital piano with extended prosthetic arms, whilst seated on a slowly rotating platform, in front of a House of Mirrors set. The title is drawn from Prussian Romantic author E.T.A. Hoffmann’s (1776-­1822) short story of the same name (Der Magnetiseur), first published in 1814. The story details the actions of Alban, a physician engaged in the mesmeric hypnosis of a second character named Mary. Hoffmann's short story portrays mesmeric communication not as a healing force – but as a manipulative power, invading and colonising the mind, resulting in terrifying loss of self and ultimately death of the female character, Mary. A recurrent trope in 19th century Romantic literature – somnambulism (or sleepwalking) – was understood at the time to be a condition of women. Contemporary gender studies have largely focused on the role that somnambulism plays in the construction of femininity. Interpretations of literary depictions of male somnambulism from the time however, tend to be determined in two primary ways; as indicative of a feminised male subject or as a metaphor for larger political and social issues. Constructed as Menippean satire, MacGarry’s Der Magnetiseur, presents a narrative focused on the magnetism (hypnosis) of a man by a man (the artist himself). Shame as a function of witnessing in the resulting somnambulism – proposes a marginalised masculinity, one in which the male body is revealed as frail, penetrable, and weak;; a corruption in normative gender binaries. Menippean satire is a form characterised by attacking mental attitudes rather than specific individuals or entities, a central tenant being the power of physical images to satirise ideas. Of particular focus is Mikhail Bakhtin's reading of Menippean satire within the carnival sense of the world, and hence the burlesque visual character in MacGarry’s film.

The exhibition’s individual works – and as an experienced whole – are all registers in the artist’s abstractions on the personal making of place and self in South Africa right now, as MacGarry sates:

It will be paradise.
This is hell.
It was paradise.

We store value in objects, and demand their obedience. We generate data-­centric futures and gamble on conjecture within constellations of falsified existences founded on visibility as capital. Merely aspirant in our revolutions and content with only a usable present, we imagine a coming condition not borne of the present.

Michael MacGarry is a visual artist and filmmaker based in Johannesburg, South Africa. He holds a Masters Degree in Fine Art from the University of the Witwatersrand. MacGarry is a fellow of the Gordon Institute of Performing and Creative Arts (GIPCA) at the University of Cape Town and recipient of the Standard Bank Young Artist Award 2010 (Visual Art). He has exhibited internationally for ten years including TATE Modern, Guggenheim Bilbao, 19th VideoBrasil, 62nd Short Film Festival Oberhausen, MAAT Lisbon, International Film Festival Rotterdam, Bamako Biennale and Rencontres Internationales. MacGarry’s practice is focused on researching narratives and histories of socioeconomics, politics and objects within the context of Africa, principally in spaces where contemporary life is in a state of invention and flux.