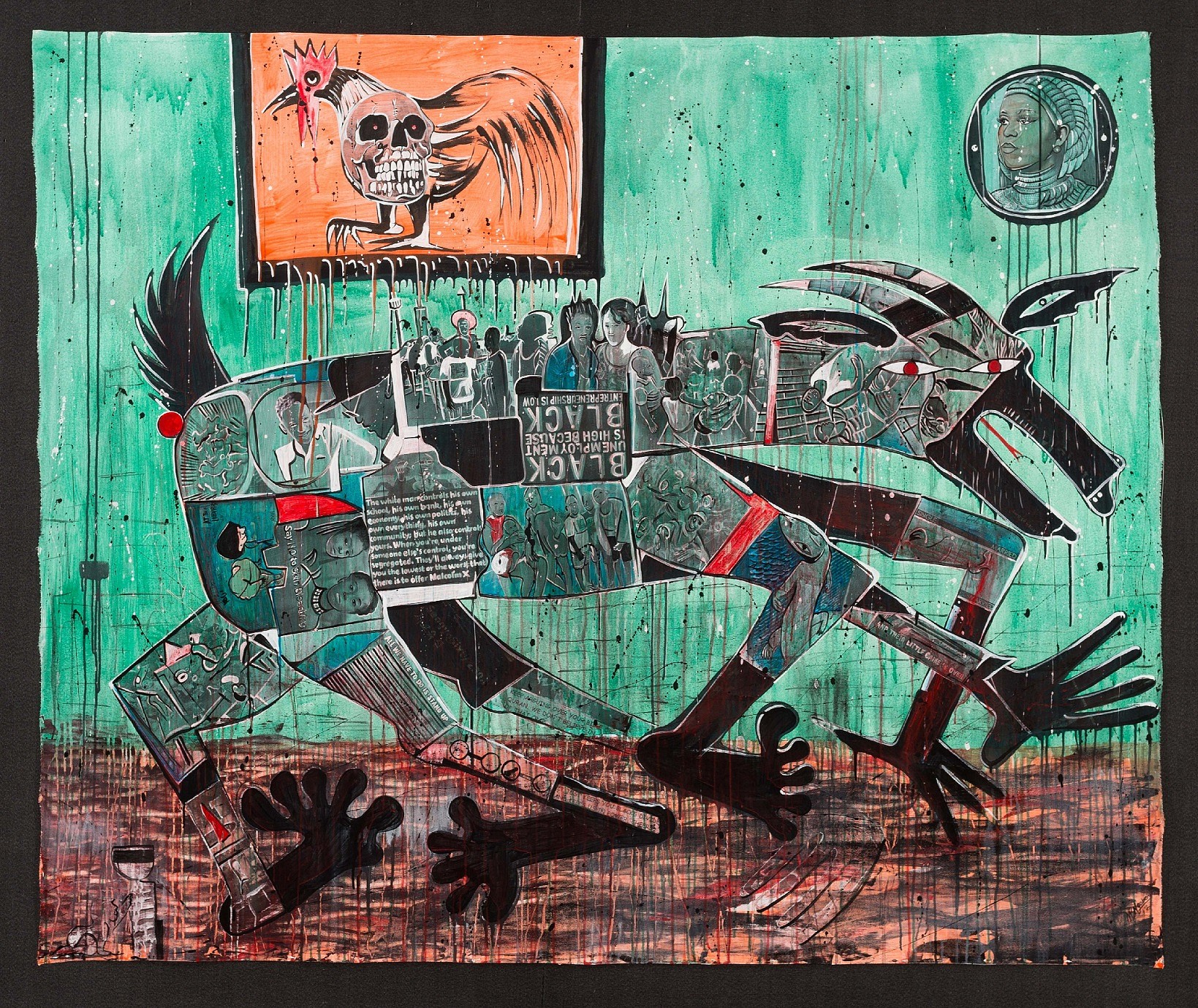 Everard Read / CIRCA is proud to present Enemy of Foe the first solo exhibition by Blessing Ngobeni at CIRCA Cape Town. Opening the 7th February, the solo will run until the 2nd March 2018. Ngobeni will also be featured this year as one of the selected artists at the Everard Read /CIRCA Main booth at CTAF Cape Town Art Fair.

Enemy of Foe follows on from Ngobeni’s 2017 Johannesburg Art Fair large-scale installation Broken Tongue: a series of monumental painted collage works, a figurative metal sculpture, an animation and performance. Here in his 2018 solo presentation, the artist reasserts his focus and developed material languages into a brand new body of artworks. Dissecting and critiquing the powers that be, Ngobeni continues to overtly address the corruption, hypocrisy and greed of the contemporary ruling elite.

The pulsating narratives of urban city life - full of potential, music, sex and wealth are thinly veiled in Ngobeni's mixed media paper and canvas based works. Using found printed materials and media based imagery, the artist cites these references as rich sources of illustration to expose the underbelly of those that have and those that have not. Here the artist faces head-on various raw subject matters and extends his conversations beyond the South African borders, addressing the xenophobic tensions between different cultures and nations within the African continent.

There is a blatant demand for accountability within Enemy of Foe. Titled artworks such as The Master of Corruption I (2017) and the Legacy of Corrupted (2017) reiterate the artist’s direct battle cry for liability and a forceful pushing for answers. Examples such as Ngongoma Ya vusiwa (the bruise of not have) (2017) shed light on the ongoing repercussion of politicians failures. Ngobeni delves into the realities of this social betrayal - where now those everyday people who were once friends and close knit as families are now jealous and resentful of anyone else doing slightly better than themselves. Ngobeni explains further:

‘The Elite, the Capitalist, the corrupt government are the so-called enemies of the people. They are said to hold the economic power and the country’s resources.  When the people’s frustrations boil over and their voices can be heard from all the city corners our leaders rise and blame these same enemies.  Yet they know that they need each other to maintain this power. They are quick to throw each other under the bus yet they hug and drink expensive alcohol together. They exchange resources and provide each other with cheap labour.

The Capitalist use the people as tools to build their wealth and the corrupt governments give the masses empty promises to win their votes to stay in power. The people watch them scramble for power from the bottom. Their mouths and bellies pregnant with wealth as the people fight for the crumbs that fall from their high towers.  Those of us that climb the tower become reflections of our leaders rather than accumulate wealth we are led by materials things. We believe power is to look down on others, drive what the ministers are driving, live in the houses that the capitalist live. Those who are at the bottom smile and wave at those that climb hoping to be pulled up, but only to pull them back to the ground. Friends become envious, families hate each other and those who struggled with you dream of your downfall.  It becomes a constant scramble instead of climbing together to pull down the corrupt we pull each other down.

Enemy of Foe, enemy of my enemy, foe of my foe that’s what the scramble creates’.