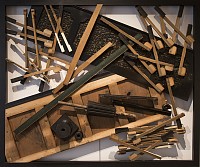 2011
Celeste Prize International Art Competition Exhibition of Finalists at the Invisible Dog, Brooklyn, New York, USA
Natural Selection 1991 - 2011, curated by Kirsty Cockerill and Clare Butcher at the AVA, the second half of a commemorative exhibition in two parts in celebration of the AVA's 40 years

2009
The National Trust , United Kingdom,  sponsorship of a collaborative performative installation investigation of     distance and proximity in relation to communication with the collaborative group, CONTINENTAL BREAKFAST.

2009
Bursary awarded for the submission of Doctoral proposal by the Dean at the University of Stellenbosch.

2006
Dimensions Variable, in: Langerman, F. (ed.) 2006, ARTWORKS IN PROGRESS Journal of the Staff of the Michaelis School of Fine Art, University of Cape Town, Volume 8, 2006

1999
The Construction of Memory, B. A. Degree Thesis supervised by Dr. Marion Arnold at the University of Stellenbosch