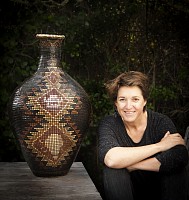 Lucinda Mudge is a contemporary South African artist working primarily in the medium of ceramics. After graduating from the Michaelis School of Fine Art, University of Cape Town (1997­-2000), she spent the following years between Cape Town and the UK before moving to Keurboomstrand, Plettenberg Bay, where she now lives and works.

Mudge’s extraordinary vases captivate the eye with their rich colours and intricate detail. Yet beneath their glimmering surfaces is a familiar world simmering with paranoia and tension.

Both a visual and a socio ­political record, her collection of vases draws inspiration from a wide variety of references, including cartoons, pop songs, fabric designs and Art Deco vase patterns, resulting in whimsical collisions of the popular and refined, the mundane and elevated, the violent and the beautiful.

This range of contemporary and historical sources merges to present a complex narrative familiar to many South Africans. Using hand­ mixed glazes and stains, and produced painstakingly slowly over the period of a full year, each piece is as unique as the narrative it tells. Themes, images and text are constantly repeated and reshuffled, embodying in their very fabric humanity’s ability to carry contradictory impulses simultaneously.

The choice of the vase as a canvas is not without significance. Commonly a functional household object, the vase has a presence which is genuinely welcoming and affirming, a familiar object that is usually intended for the home.

Lucinda Mudge has work in major corporate and private collections nationally and internationally, including the United Kingdom, Australia, Guernsey, the Netherlands, Italy and Russia. Lucinda’s work was recently exhibited at the Guggenheim Bilbao, Spain, as part of the exhibition Making Africa (2015).

'The Wolf Is Always Near’, Everard Read London, United Kingdom

‘Kill You Eat You’, Circa on Jellicoe, Johannesburg, South Africa

‘Lasers in The Jungle’ The Gallery at Grande Provence, Franschhoek, South Africa