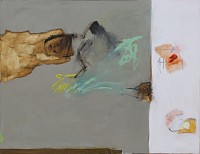 Born in Bulawayo, Zimbabwe, Lorienne Lotz currently lives in Cape Town. She completed a Postgraduate Diploma in Fine Art at Michaelis UCT (2013) and was awarded a Sasol New Signatures Merit Award (2014). Lotz studied in the ‘80s under Bill Ainslie at the Johannesburg Art Foundation. Since 2008, the annual intensive Rosenclaire workshops in Italy and South Africa (run by duo Rose Shakinovsky and Claire Gavronsky) as well as the Astar process and painting sessions with Lindy Solomon are influences which have been instrumental in forging Lotz’s deeply intuitive material process and awareness of a formal language. Her work is held locally and internationally in private collections.

“I attempt to re-connect with the deeply embedded narratives which underpin the dichotomies of the contemporary human experience at both a microcosmic and macrocosmic level thus revealing the paradoxes, irony, contrasts, and counter-points that are in constant friction to one another, and yet are always interdependent. It is from this that disparate images arise in which the fragility and instability of our seemingly certain reality is questioned and where the results are deconstructed in an attempt to subvert meaning so as to enable a multifaceted interpretation.”