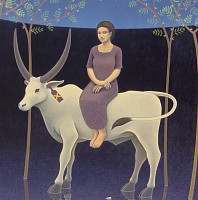 KEVIN ROBERTS (b. 1965, Rustenburg, South Africa)Kevin Roberts was born in 1965 in Rustenburg, South Africa. His serene, balanced and carefully constructed paintings and sculptures have received widespread acclaim. Winner of several awards with his distinctive style of rhythmic patterns and recurring symbols, he is one of South Africa’s most admired artists. He lived and worked in Johannesburg, lecturing part-time on painting and ceramics around Pretoria. Roberts passed away in 2009. He will be missed.

1987
Schweickerdt Prize for most promising student

2004
Pretoria, A selection of Painters and Sculptures from the Nation’s Capital. Everard Read, Cape Town

Kevin Roberts affirms the visual, or let us call it the ‘beautiful,’ as the essence of his art…. His paintings explore beauty, craftsmanship, pattern and image as part of an integrated whole. In this he too becomes part of a tapestry of painting stretching from the traditional to the contemporary.