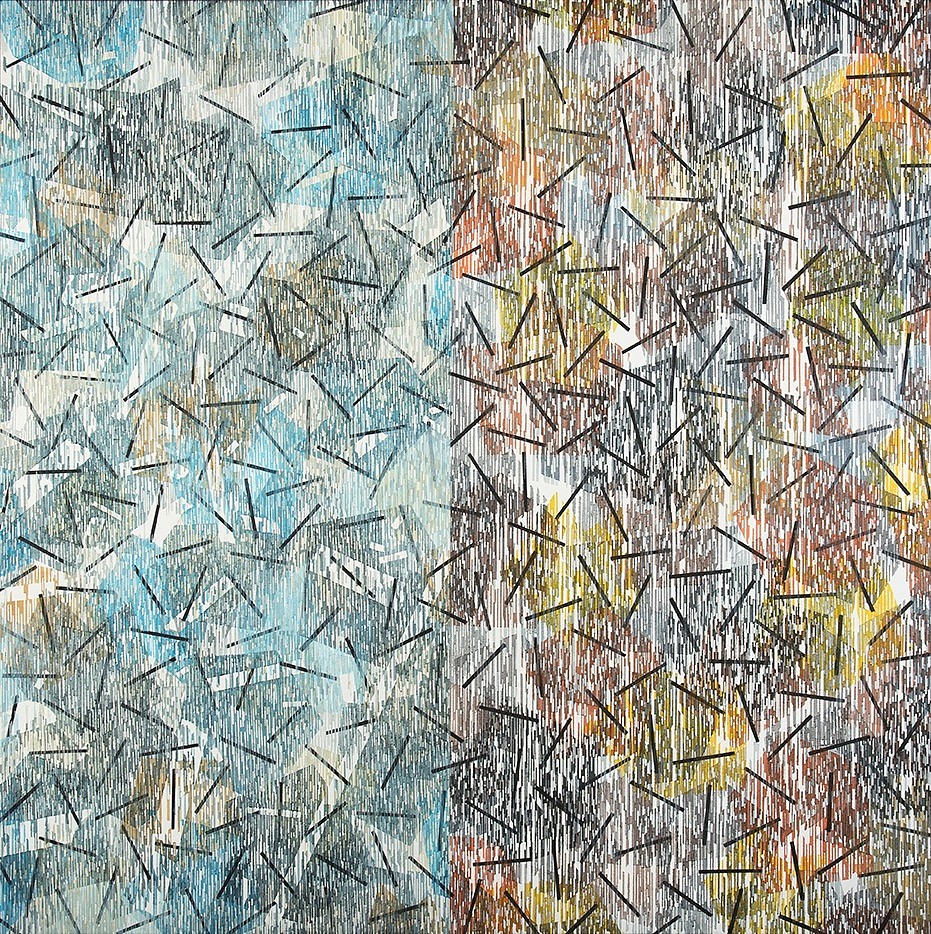 Everard Read CIRCA is pleased to present No Signal, a solo exhibiton of drawings and paintings by Richard Penn. This the debut by the artist with the Everard Read Gallery, and his first presentation at the CIRCA Cape Town space. The exhibition runs from the 8th until the 30th of November 2017.

A walkabout with the artist will be held on Saturday 11th November at 11:00am in CIRCA.

A portfolio is available upon request.

‘The profound discovery that the static or white noise of an untuned analogue television set contains the left over signal from the birth of our universe has been a significant locus from which Penn’s work has developed over the last 10 years. No Signal refers to that often overlooked television channel that was at once simply garbled nonsense and at the same time the carrier of the news that the universe had landed.

Penn draws on the raw data of science. Information that scientists patiently sift through to find patterns so that some kind of sense can be made out of the hidden knowledge provided by their instruments. These scientists have to tread the line between invisible data, mathematical abstractions, theoretical imaginings and universal laws to provide humanity with a speculative framework for our lived reality. As an artist Penn uses the ‘raw data’ of mark making - pure lines, dots, basic shapes etc to patiently imagine these hidden worlds and realities. The drawings are mostly governed by their own internal rules set at the start by the artist - one mark, one direction etc and the proliferation of the rule is allowed to evolve into a cohesive yet abstract form.

In the Mesh and Foam series Penn attempts a magnified view at the quantum level where only mathematics and art have the language capacity to imagine the entirely abstract reality of which our known world is comprised. Similarly, in the Ones and zeros series of charcoal drawings, Penn draws in the digital realm where everything we see and experience is comprised of abstract ones and zeros.

Penn is interested in how science has taken us far beyond what we can experience with our natural senses. When exploring reality at the scale of the extremely small or the extremely large, our ability to grasp the nature of things becomes elusive. It is an example of how human intelligence has transcended our physical limitations, transported us into a universe of abstraction and at the same time, extended our scope to dream.’

Richard is a self-taught animator with a Masters Degree in Fine Arts (with distinction) from the University of the Witwatersrand in Johannesburg, South Africa. In 1997, he was awarded 3rd place in the PPC Young Concrete Sculptor Award. After completing his honours degree in 1998, majoring in painting with distinction he developed and taught an animation course for 1st, 2nd and 3rd years in the Fine Arts Department at Wits University.

In the years leading up to 2004 he has been a finalist in the ABSA Atelier, The Kempton Park Art Competition and The Sasol New Signatures Art Competition. In 2000, he collected and compiled a 2 hour animation programme for the Klein Karoo National Arts Festival and Urban Futures. In 2004 he was awarded the overall winners prize in The Sasol New Signatures Art Competition. In 2002 he accepted the position of Head of Animation at AFDA Johannesburg (The South African School for Motion Picture Medium and Live Performance) and maintained that position until 2009. In 2007 he accepted the position of Vice-Principal of the Learning Department at AFDA but resigned from that position in 2008 to complete his Masters degree and to concentrate on his career as an artist. In 2009 he developed and is facilitating introductory animation courses for school learners. He has coanimated and co-directed 2 short films with Mocke J Van Veuren, and has directed and animated 3 short films of his own. In 2010 he started STRANGE Blue duck, an animation training company which teaches stop frame animation to children from 9 years and up and facilitates corporate animation team-building and creative enrichment workshops. www.strangeblueduck.co.za