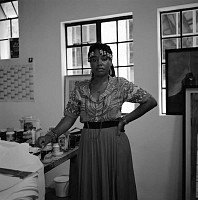 We heal by retelling our stories.

Teresa Kutala Firmino’s work negotiates trauma both personal and collective in her everyday life. Her paintings are constructed scenes of the past and present, which are sometimes intertwined. Firmino carefully collects images from magazines, newspapers, historical documents and social media, and places them in colourful, box-like stages. This creates surreally baroque scenes which take place in tightly confined interiors, where the characters have the opportunity to re-enact their stories or construct new ones. This process allows Firmino to create alternative past, present and future narratives of Africa, thus rebuilding her own archive of African history.

Firmino seeks to investigate the trauma that African people in her community and beyond have experienced and continue to experience due to colonisation, civil wars and present day obstacles. Her own stories begin with the collective trauma of Pomfret. Located in the North West Province of South Africa, and the place where she was born, Pomfret is a community of former 32 Battalion soldiers and their families, many of whom settled there after the end of the South African Border War.

Colonial rule and the trauma it induced forced many African people to cling to one another in a common cause, which was to create free and independent countries. Africans, though constantly reminded that they were seen as less than human, held on to what reminded them of their humanity: their communities and their struggles for freedom. Once they achieved a form of independence, though, many civil wars erupted, where the people who fought for the same freedom were caught in a new, raw struggle for power. These civil wars caused a second wave of trauma; suddenly the people one depended on for a sense of community and humanity now turned against each other.

Both the women and men in the Pomfret community experienced these traumas – but it is the women who were subjected to further pain. Post-traumatic stress disorder (PTSD) is not only experienced by people who have been through a war. Firmino affirms that the women in the community experienced a second wave of trauma: rape, abuse, accidents and torture. The women clung to what gave them a sense of security and humanity, which were their husbands and the community. Many of them experienced abuse, and some were even killed by their partners. Those who survived could not trust the community for support, because society had normalised abuse against women.

Kutala Firmino looks at how, despite the trauma they experienced, many of these women had to continue living with their abusers. The artist interrogates what it is about the black female body and mind which, despite trauma, continues to thrive. Is she truly living, or is she in constant melancholy as she exists in the aftermath of colonialism, civil war and betrayal? Is negotiating trauma realising that your abuser is possibly part the bigger of cycle of abuse?

Teresa Kutala Firmino is a multimedia artist, now based in Johannesburg, working with paint, photography and performance. She is part of a collective called Kutala Chopeto, which started as an investigation into their shared history which is linked to the 32 Battalion, the soldiers who were settled in Pomfret after the Border War.

2016       The History We Are Told Not to Speak (The History of the Pomfret Community), UNISA School of Arts Conference

2016       The Untold Story of the Pomfret Community, Black Portraitures iii