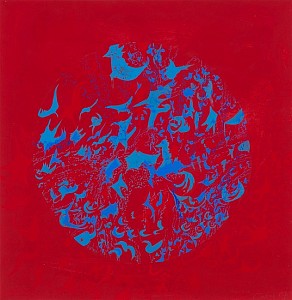 The Shape Of Nature - Arabella Caccia

As soon as Arabella Caccia explains where her art comes from, and having seen her work, it all makes sense to me. It just seems to fit perfectly. Looking at her work evokes a wave of emotion, much like the actual waves that you might spot woven into her work multi-layered work. Born in London to an Italian father and a South African mother, Caccia grew up in Tuscany, central Italy, and lived her teenage years in Johannesburg. After spending time in SA’s biggest city, she found herself living and studying in some of the biggest international cities – New York, London and Florence. She now has four daughters – of whom none went into the world of art. Caccia laughs at this fact, saying that they have definitely seen enough of that “crazy” world and decided it wasn’t for them. The origin of her newest exhibition, Without Words – which was hosted at Everard Read in the Boland town of Franschhoek – consists of work she had previously done on baobab trees in Botswana. She visited the Southern African country to do a series of drawings on their indigenous giant baobab trees. One day, she was lying in a hammock strung from one of the trees, when she noticed the texture of the tree’s bark and all the intricate patterns that it created. She became captivated with those delicate patterns and started sketching. She even made silicone casts to make multiplemprints with. This was where it all started.